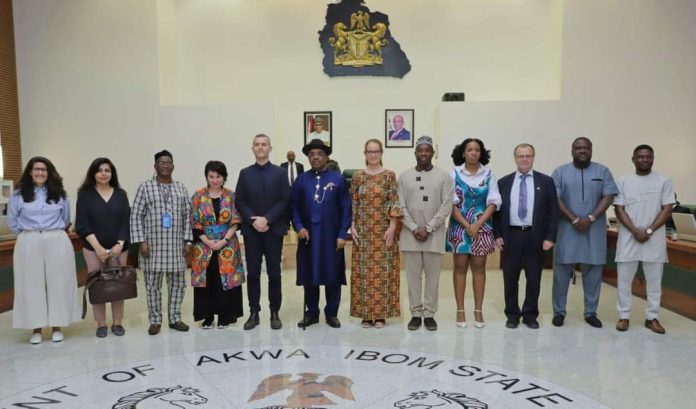 The Akwa Ibom State Government has announced its readiness to partner with Danish Government to promote School Meal Programme for vulnerable Children in selected schools.

The State Government also seeks to collaborate with United Nations Fund for Population Activities (UNFPA) to assist in reproductive health care programmes for women and campaigns against gender-based violence.

Governor Udom Emmanuel made this known on Tuesday, when he played host to the Danish Ambassador to Nigeria, Mr. Sune Krogstrup in company of Ms Elizabeth Ulla Mueller, Resident Representative, United Nations Fund for Population Activities (UNFPA), in his office at Government House, Uyo.

Governor Emmanuel who acknowledged the initiative of School Meal for children noted that State Governments should be involved at the initial stage of the scheme where necessary contributions can be made to generate the projected impact and results of the project.

“I am glad to hear about funding of the school meals programme, great idea but I will love a situation where State Government will also be carried along in this programme because I don’t know the design of the programme, it is just super-imposed and being implemented on a state, I think we need to rejig that scheme and look at the structure and then let’s collaborate, let’s partner and make this scheme work well because we are not feeling the impact”.

The Governor also assured UNFPA of collaboration to minimize Gender-Based Violence (GBV) stating that the State Government has signed into law Violence Against Persons Prohibition (VAPP), to tackle all forms of violence against persons, provide maximum protection for victims and punishment of offenders.

The Chief Executive said the State Government is making concerted efforts to end gender-based violence as the wife of the Governor, Mrs. Martha Emmanuel through her pet project Family Empowerment and Youth Reorientation Path Initiative (FEYRep), is leading in the campaign against all forms of violence against any gender.

He also hinted that the State Government in this regard has built a Gender-Based Violence Center that will be inaugurated this year.

” We want to let you know that we have signed various laws to support the protection of a girl child and child abuse in the State. Now we at the advance stage of building the GBV center in the state that will compete favourably with others places, I hope to commission that this September”.

“I acknowledge the contributions of Denmark as a country in ending Gender-Based Violence and as a State we are serious about it, we take personal interest to minimize this, I want to minimize this violence especially other domestic violence”, the Governor assured.

Governor Emmanuel further solicited collaboration and support from the Danish Government in the area of maritime security to curb the challenges in the state’s shoreline and thanked them for showing concern about generating data for population in the country.

In his remark, the Ambassador of Denmark, Mr. Sune Krogstrup, said his visit to the State is to assess the impact and state of the ongoing School Feeding project, School Farms for School Meals (SF4SM) stating that Denmark is set to fund the feeding programme in the state, which aims at improving the nutrition of children.

“Another reason for my visit is to visit a Danish funded programme called School Farm for School Meal in Akwa Ibom State. Denmark has decided to fund the programme in selected schools in Akwa Ibom we target the most vulnerable children”.

The Danish envoy noted that Denmark share the same objectives with UNFPA in the fight for the right of women and girls and ways to minimize Gender-Based Violence and conflicts.

Mr. Krogstrup also indicated that Denmark is ready to partner the state in areas of food, agriculture and maritime security and thank Governor Emmanuel for a warm reception accorded the team.

Also speaking, the Resident Representative, United Nations Fund for Population Activities (UNFPA), Ms Elizabeth Ulla Mueller, thanked Governor Udom Emmanuel for his contributions which she noted is a demonstration of his commitment in the collaboration with UNFPA said the key intervention areas of reducing maternal mortality, encouraging family planning and minimizing all forms of gender-based violence is on course.

Mueller, called for support in conducting population census in Nigeria which she noted is long overdue, adding that it will help government make informed decision on how to direct their social investments to yield the desired results.