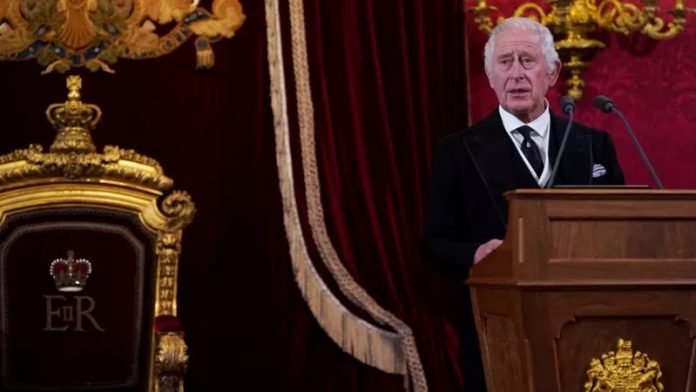 King Charles III has been proclaimed as Britain’s new monarch in a ceremony followed by gun salutes and the reading of proclamations in London and across the four corners of the United Kingdom.

The proclamation was read publicly in the other capital cities of the UK – Edinburgh in Scotland, Belfast in Northern Ireland, and Cardiff in Wales – and at other locations.

The King became the monarch after the death of his mother, but a meeting formally confirmed it on Saturday.

He also approved the day of the Queen’s funeral, Monday, 19 September, being a bank holiday at Westminster Abbey in London.

Remembrance services for Queen Elizabeth II will be held across the U.K. on the first Sunday after her death.

Special guidance has been issued by the Church of England on services during the period of mourning.

“Flags to be lowered to half mast, and to remain at this height until the day after the State Funeral,” it says, adding that bells should be rung at a “practicable” time.

On Sunday, the queen’s coffin will be driven from Balmoral Castle, Royal Deeside, to the Palace of Holyroodhouse, Edinburgh, the official residence of the British monarch in Scotland.

Public viewing of the vehicle will be possible along the route in Aberdeenshire, Aberdeen and Dundee, officials said.

The queen’s coffin will be carried into the Throne Room at Holyroodhouse, where it will remain until Monday.

Proclamations for the queen will be read elsewhere in Scotland, in Northern Ireland and Wales.