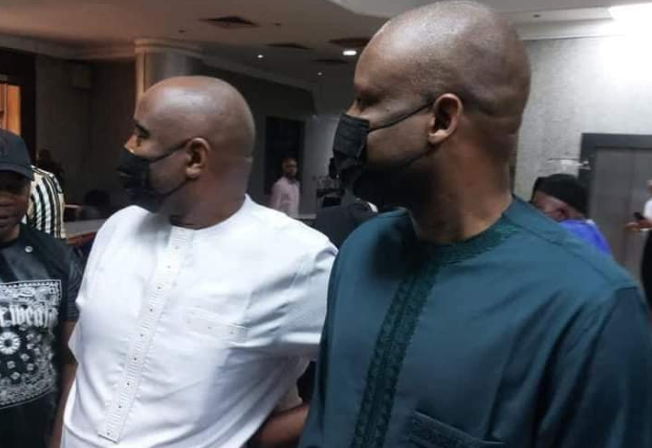 The court, in a judgement delivered by trial Justice Emeka Nite, convicted Umeibe and Ezenwanne on counts 5, 6 and 7 of the drug trafficking charge the National Drug Law Enforcement Agency, NDLEA, preferred against them.

The duo were arrested at the Akanu Ibiam International Airport in Enugu while attempting to smuggle cocaine into the country.

They were arraigned before the court in March alongside DCP Kyari and four other police officers- ACP Sunday J. Ubia, Insp. Simon Agirigba, Insp. John Nuhu, and ASP Bawa James.

Both Umeibe and Ezenwanne had upon their arraignment, pleaded guilty to the drug trafficking charge against them.

Justice Nwite initially adjourned to review facts of the case against them. But at the resumed proceedings on Tuesday, the NDLEA, through the Director of its Legal Department, Sunday Joseph, informed the court that it has entered into a plea bargain agreement with the two defendants.

Justice Nwite, in his judgement, convicted and sentenced the two defendants to two years jail term on each of the three-count charge against them.

The court noted that the two defendants were remorseful and ruled that the sentence would run concurrently, commencing from the date they were arrested.

The court also adding that the defendants should forfeit their international passports in accordance with section 30 of the NDLEA Act, Cap M30, Laws of the Federation of Nigeria.

It directed the NDLEA to constantly monitor the two defendants to ensure that they do not engage in any drug related criminal activity while serving their jail term.

Justice Nwite subsequently fixed July 18, 19 and 20 for full blown trial of DCP Kyari and his men, as well as for hearing of their fresh application for bail.