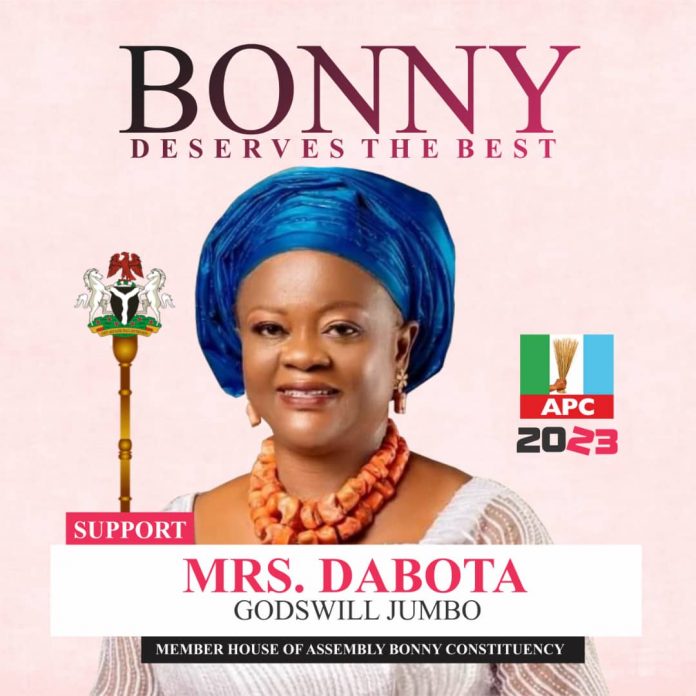 Hon. Mrs. Dabota Godswill Jumbo has been declared the winner of APC House of Assembly Primary Election for Bonny Constituency.

In a free, fair and credible Primary Election held at Bonny Women’s Hall, she polled 52 votes out of 57 votes cast to defeat her opponent, Mr. Howells Brown, who got 4 votes. 1 vote was declared void. Three delegates were disqualified for lack of eligibility to vote.

In her acceptance speech, a highly elated Mrs. Dabota Godswill Jumbo thanked the leader, Hon. George Fubara Tolofari, other leaders, delegates and members of the party for the confidence reposed in her. She promised to ensure that she brings victory to the party at the election proper next year.

In his speech, the Chairman of APC, Bonny Chapter,. Amasenibo Israel Waribo Pepple, while congratulating Mrs. Dabota Godswill Jumbo, reminded her that with her victory in the primary election, she is now the property of APC, Bonny. He therefore admonished her to see herself as such and to always be on the same page with the party. “From this moment, your campaign structure will collapse into the party structure. You now belong to the party,” he said.

In his vote of thanks, the secretary of APC, Bonny Chapter, Mr. Benson Ebenezer Pepple, thanked the delegates, INEC officials, security agents as well as members of the Electoral Panel for their respective contributions towards the success of the exercise.

The primary election was monitored by officials of Independent National Electoral Commission (INEC), the Police, DSS and Civil Defence.