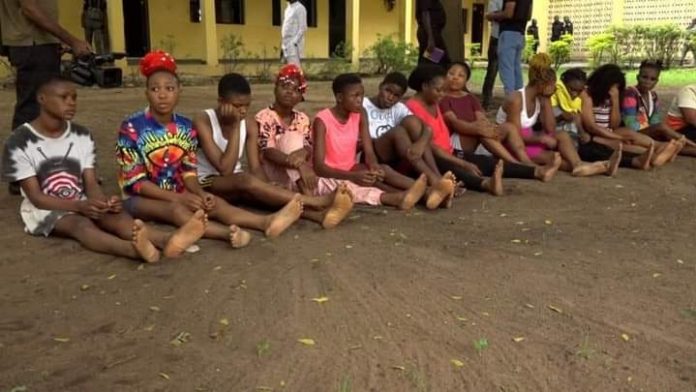 It was garnered that a sting operation was carried out on Friday, 15th April 2022, after the command received information that the hotel located at Aragba in Otokutu Town, Ughelli South Local Government Area of Delta State was being used as a brothel for underage sex workers.

According to the Delta State Commissioner of Police, CP Ari Mohammed Ali during a press briefing at the Command’s Headquarter in Asaba, investigations revealed that a woman simply identified as Joy trafficked the victims from Rivers, took them to Patani to forcefully swear an oath then brought them to Otu-Jeremi and handed them over to the owner of the brothel by name, Edwin Etareri.

He said that the owner of the hotel is currently at large but his wife, Grace Etareri is currently in custody alongside ten men and ten suspected prostitutes that were arrested during the raid.

His words, “On 15/4/2022 at about 2330hrs, the Command received information that Fagoma Hotel located at Aragba in Otokutu in Ughelli South LGA of Delta State is being used as a brothel where underage children are trafficked and used as sex slave.

“Investigations revealed that one Joy ‘f’ surname unknown now at large trafficked the underage girls from Rivers State took them to Patani where they were forced into taking an oath before they were brought to Otu-Jeremi and harbored by one Edwin Etareri the owner of the said brothel and his wife one Mrs. Grace Etariri currently in custody.

“Ten other male suspects and ten female suspected prostitutes were also arrested during the raid. Investigation is ongoing.”