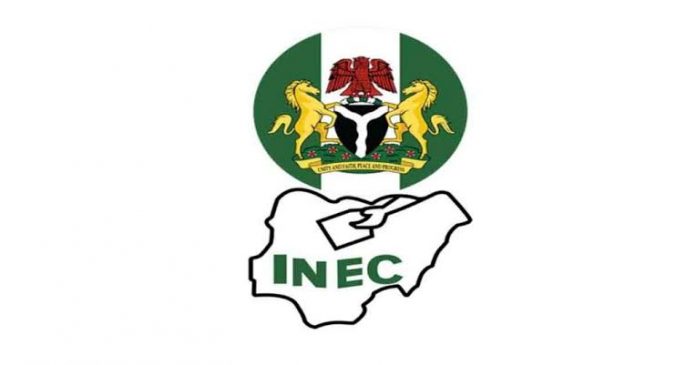 INEC has confirmed the Successful submission of Candidates profile in the Gubernatorial race under Accord party in Rivers State, Chief (Barr) Dumo LuLu-Briggs and his deputy Dedam Tambari Hilda. 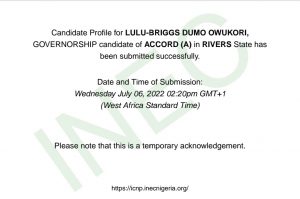 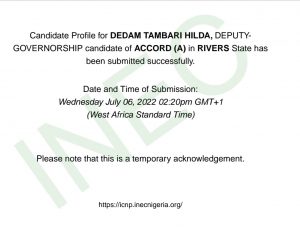 Dumo’s deputy was made known to the public after the profiles of the Candidates were successfully submitted and Confirmed by INEC  on July 6th 2022.

Chief (Barr) Dumo Lulu-Briggs or DLB as he is popularly known and which is now known as the DLB Brand is a seasoned legal practitioner of over 27 years post call, an accomplished businessman, technocrat, politician and grassroots mobilizer. He is the chairman and chief executive officer of DLB group, a conglomerate of companies with interest in oil & gas, and marine.

Princess Mrs Tambari Hilda Dedam (nee Karipo) is a businesswoman and social advocate from the Ogoni town of Bane in the Khana L.G.A of Rivers State. She attended State School, Bori, for her primary education before moving on to Marian High School, Bane, for secondary education. She further attended the School of Basic Studies in Port Harcourt and graduated to attend Ahmadu Bello University, Zaria, Kaduna State.

Tambari Dedam observed her National Youth Service Corps (NYSC) Programme with UBA Plc, Yola, Adamawa State. After completing her national service, she moved to the Royal Hospital, Yola, Adamawa State. She returned home to the People’s Bank of Nigeria in Bori, Rivers State, where she contributed to the foundational growth of the company upon her resignation. She proceeded to work at the Delta East Community Bank in Port Harcourt before transitioning into a managerial role at Pavilion Technology (an affiliate of Schlumberger Nig. Ltd). In 2001, she established Detaz Resources, a private business and consultancy firm that she oversees to date.

Tambari Dedam is married to Hon. Deele Dedam of Beeri Town, and is the mother of four children. She maintains a personal life between driving women/community growth in rural Ogoni and leaning into her faith in the catholic church.