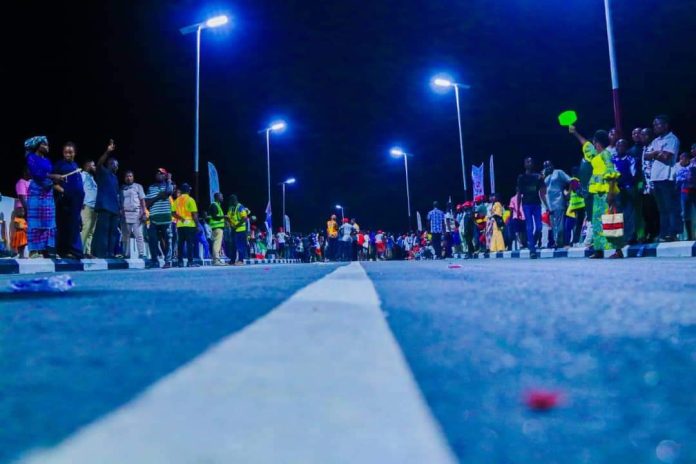 The inauguration is part of activities marking the second year anniversary of the Prosperity Administration.

Gov. Diri said: “Building of a bridge, wherever it is, be it human or physical is one thing that everybody wants to do, rather than burning bridges, we all prefer to build bridges. The economic, political, and social importance of this bridge cannot be over emphasised, we all know as Bayelsans that this bridge is the bridge that also conveys us to another Local Government Area, not only from Yenagoa to Ogbia, but from Ogbia to Nembe and you know the market economy of this bridge, and therefore when we assumed office, we thought and believed that this was one project that should be a priority, and we took it as a priority and this bridge was awarded.”

Speaking at the Inauguration, Dr. Jonathan said “we cannot develop Bayelsa State without building bridges, he thanked Governor Diri and his team for doing very well.

“Today is a unique day, and I am quite pleased with what the Governor is doing. We went to Nembe to Inaugurate the Nembe Unity Bridge and we are here to Inaugurate the Elebele Bridge, and of course we cannot develop Bayelsa State without building bridges, so I have to thank the Governor for this, this bridge is quite important not just for the Elebele people, Elebele serves almost like intergence to people going to other parts of Ogbia to Nembe, so I thank the Governor because he has done very well for us.”

Other Dignitaries to Honour the occasion are Deputy Governor of Bayelsa State, Senator Lawrence Ewhrudjakpo, members of the National and State Assembly and top government functionaries.