How we killed my wife’s friend, sold her head for N70,000 – Couple confesses 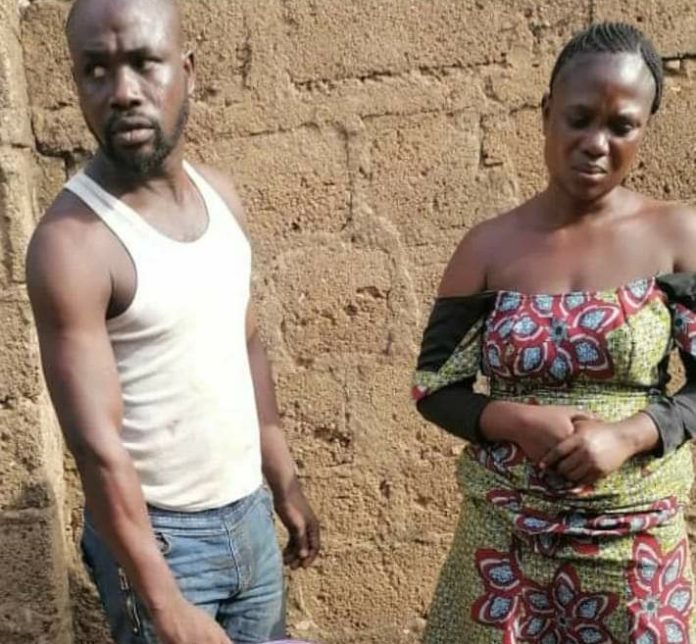 Recall that a couple who was arrested by the Ogun state police over the weekend for being in possession of fresh human parts has narrated how the victim was lured and beheaded.

The suspects, Kehinde Oladimeji (43 years) and his 35-year-old wife, Adejumoke Raji explained that they sold the deceased head for N70,000 to a merchant, identified as Omo Baale, a resident of Ibadan, Oyo state.

The couple who reside at no.72 MKO Abiola way, Leme, Abeokuta in Abeokuta South LGA of Ogun state, narrated how they beheaded the deceased after serving her noodles and egg.

Oladimeji, the husband said “There was a day, my wife invited her friend, a lady to our house for a visit. The first time she came was a Tuesday, she came that particular day and went back home.

“But the second day she came, it was on a Thursday. My wife on that day, cooked noodles and eggs for the lady which she ate. Later, the lady went into the bathroom and showered.

“But, when it was getting dark that day, I inquired from my wife when her friend would leave, but my wife said the lady said she was weak and she would need to lie down and regain her strength. I was sitting at the backyard, but when I returned to the room I realized my wife had killed her friend and dismembered her body.

“When I asked her what happened, she told the friend had offended her a long time ago. The person who bought the head came from Ibadan. His name is Oluomo.

“I have a friend in Ibadan, who is popularly known as Omo Baale. He told me he needed human head, but I told him I didn’t have such connection of anybody who can help facilitate it. My wife heard the discussion and asked me how much the man would pay for it (human head), I told her he was ready to pay N70,000. I never knew my wife had made up her mind.

“As you can see, I’m not a strong person. When the incident happened, I had wanted to kill myself”.

But, the wife, Adejumoke denied killing her friend, saying “I know nothing about it. Stop framing me up.”

However, she confirmed that her husband’s friend, one Michael had handed over a sack to them, which they later discovered contained human parts, after three days.

The Police Spokesman, Abimbola Oyeyemi had said the suspects were arrested following a report lodged at Kemta Divisional Headquarters by one Chief Moshood Ogunwolu, the Baale of Leme Community.

The Baale reportedly told police one Pastor Adisa Olarewaju who is a co-tenant with the suspects informed him of offensive odours coming out from the room of the suspects.

The Police Spokesman, Abimbola Oyeyemi on Saturday told newsmen that following the complaint, the DPO Kemta Division, CSP Adeniyi Adekunle quickly led his detectives to the scene where search was conducted.

“On searching the room, a plastic bowl containing fresh different parts of human being was discovered in the room, and the couple were promptly arrested,” Oyeyemi said.