I DIDN’T GO TO COURT AGAINST ATIKU – WIKE 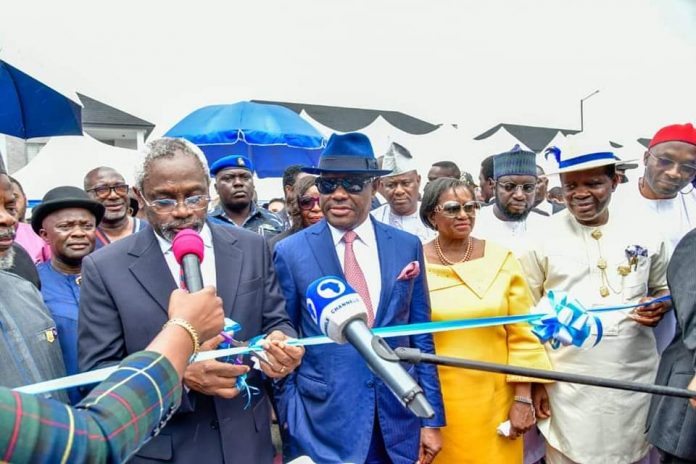 Rivers State governor, Nyesom Ezenwo Wike has described as untrue, reports in the media that he took Alhaji Atiku Abubakar, the presidential candidate of the Peoples Democratic Party, PDP to court.

The governor rather accused some favour seekers who hang around Alhaji Atiku as the masterminds of such plots in their bid to tarnish his reputation.

Governor Wike made the clarification at the inauguration of the Rivers State House of Assembly Quarters, which was performed by the Speaker, House of Nigeria’s Representatives, Reps. Femi Gbajabiamila in Port Harcourt on Friday.

“People have called me throughout this morning and said all kinds of things that I went to court against Alhaji Atiku Abubakar. I want to say categorically, if I have a reason of going to court, I will go to court, but I didn’t go to court.

“Yesterday too, they said I removed all PDP flags at Rivers State Government House. But I just have to say these things for Nigerians to know that I have kept quiet, and being busy delivering dividends of democracy for my party to win election in Rivers State.

Governor Wike explained that if he wanted legal action against the outcome of the PDP presidential primary, it would have been prosecuted within two weeks after the primary, when such pre-election matters are entertained.

“I didn’t go to court, I have no reason to go to court. But those of you who are plotting and saying that I went to court instead, for you to have come out now to say Wike went to go court, I say shame on you. Shame will be on all of you.”

“I have told the candidate, you will win or lose this election because of people around you. Anybody who knows me know too well that if I was going to court, I would have gone to court within two weeks after the primary because it is a pre-election matter and after two weeks, you can’t go to court.

“The legal adviser of the party called me and I told him that he knows that there is mischief going on. But that he knows me very well, if I’m going to court, it is not those kinds of lawyers that I would have used and I don’t even know the lawyers.”

Governor Wike noted that there is a bigger challenge ahead, and it is how to win the 2023 general election for the PDP. This concern should be the focus of all true lovers of PDP who want electoral victory.

“You’re supposed to be talking about how you will win election. All these rent seekers around him are not doing him any favour. Rather they are trying to make him not to win election. But if that is what they wished, I wish them good luck.

“You see that I am not talking. I am doing my work, so leave me to do my work. Those concocting ideas everyday, social media cannot make you to win election.

“Election is about the people and by the people. Let those in Abuja with you (Atiku), tell them to go home and campaign for you to win election. Leave Wike alone, enough is enough.”

Governor Wike recalled that during the 2019 general elections, the same people claiming to love the PDP more now in South-South, sabotaged the party’s winning chances in the region.

He lamented that instead of them, particularly the governors, to plot on how to win the 2023 election, they are joining in wasting the time plotting accusations that they would level on him.

“When I see people talking about PDP today, I say to myself what is going on in this world. In the South-South, they all betrayed us. President Muhammadu Buhari wouldn’t have won the 2019 election because he won’t have had the spread.

“But all the States in the South-South made Buhari to have 25 percent. It was only Rivers State that did not give Buhari 25 percent, I am challenging anybody on it.”

Governor Wike said the action of those persons who gave President Buhari the winning margin in 2019 invariably also frustrated the winning chances of the PDP candidate then.

The Rivers State governor pointed to how he had urged Alhaji Atiku to look carefully at the governors around him and understand why they worked against his victory in 2019.

“I told Atiku the other day, I said to him, all these governors that you think they are working with you, what happened in 2019. Nobody wants to say the truth.

Governor Wike said he was busy inaugurating projects that have been completed for the benefit of Rivers people, and would start politicking and choke his opponents.

The governor expressed doubt if the National Assembly members have the guts required to impeach President Buhari as they have threatened to do.

This is because, he noted, they have not been firm in their role to check the excesses of the presidency and wondered if the current threat is not another gimmick to deceive Nigerians

Governor Wike said it was imperative for him to have invited Gbajabiamila who, as a friend, had supported Rivers State government to get the refund from the Paris club. Part of the money, governor Wike noted has been expended on the Rivers State Assembly Quarters.

Inaugurating the project, Speaker of the House of Representatives, Reps. Femi Gbajabiamila noted that housing facility will definitely provide conducive residences for members of the Rivers State House of Assembly.

Gbajabiamila described the project as a worthy achievement that will long impact the performance of the legislature in this state and stand to the credit of the men and women who envisioned and executed it.

“The highest test of our democratic experiment lies in our ability to deliver policies and programmes that improve the lives of our people. And we achieve this objective by building ladders of opportunity that allow them to achieve the highest aspirations of their hearts.

“If we can accomplish this, we have justified our public service; if we fail, nothing else will matter. With this project, His Excellency Nyesom Ezenwo Wike has demonstrated his recognition of the vital role of the legislators in a functioning democracy.

“It now falls to the present and future legislators to live up to the high expectations of their office and justify the confidence reposed in them.”

In his address, Speaker of the Rivers State House of Assembly, Rt Hon. Ikuinyi-Owaji Ibani said in his 16 years now in the assembly, he had not seen such gesture shown to the legislative arm of government in the State.

“I have not seen anything like this. Governor Wike also built an iconic residence for Speaker of the Rivers State House of Assembly. This is added to this 32 units of 4bedroom duplexes.

Providing the description of the project, the permanent secretary of the Ministry of Housing, Mrs Patience Whyte Amakiri said while the civil work was done by Lubrik Construction Company, Julius Berger Nigeria PLC handled the furnishing of the flats.

According to her, there are 16 blocks of 4 bedroom duplexes making 32 units on total, an ancillary building that has multipurpose hall, conveniences, and leisure spaces. There are also three guest houses, 150 meters capacity water tanks and a generator house.