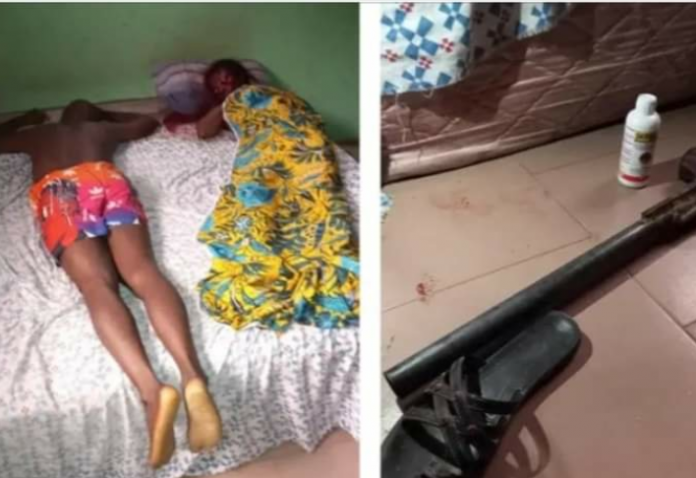 A middle-aged man, Mr Patrick Markson, has allegedly committed suicide after killing his wife over what eyewitnesses described as domestic matters in their Yenagoa residence in Bayelsa State on Thursday morning.

It was gathered that Mr Markson allegedly struck his wife on the head with a sledgehammer while she was in a deep sleep.

A facebook user, King James undiluted, who shared the story said, the man After killing his wife waited for her to bleed to death and afterwards drank what is suspected to be a poisonous substance.

Eyewitnesses further explained that he slept on the same bed, close to where he killed his wife at their residence, along Odede Street, Off Tombia Amassoma road in Yenagoa metropolis.

According to sources, the 35 years old victim, identified as Mrs Hannah Markson, is from the Okotiama community in the Gbarain clan in the same Yenagoa.

A family source, Mr Victor Kubor said: “I was surprised when I heard the news about their death. I know they were having issues, two weeks ago he complained to me about some marital issues, and I told him that we will see and discuss but we never did.”

“This morning a friend called me that both husband and wife were dead; that the husband (Patrick) beat the wife to death and drank snipper after his action. I am so shocked at the news, who did they leave the six children to? What a world!”

According to the elder sister of the wife, Mrs Boufuru Timipre, her sister was a gentle lady that had no time for problems.

She said: “Yesterday we were frying garri and the husband called me that he wanted to speak with my sister if we were together, I told him that when I get to where she was I will pass the message. On reaching her I told her and immediately we tried reaching him but we couldn’t, later he called again but I have left where she was so he told me to tell her to bring garri for home use.

“This morning, the son called me that the mum was seen dead and he wants me to come, as I was going to the house I called him and he told me the dad too was dead. So when I got to their house I went straight to the room, and I saw them both lying on the bed dead, but I noticed a can of snipper by the bed and a big hammer.”

She added that they had matrimonial issues but she has often spoken and settled both of them as husband and wife.

She added that “the genesis of their problems was when my husband died and I had a contract which I engaged him to benefit, after the contract he got N800,000 for himself and never gave anything to the wife, she was bittered and reported the issue to me, I approached him and told him what he did was bad to had treated her like that, because I involved him due to the facts that he married my sister but I didn’t suspect it will result to this, look at now they are both gone.”

“Preliminary investigation reveals that one Patrick Markson ‘m’ 46 years, a native of Onopa, Yenagoa, attacked and killed his wife, Hannah Markson ‘f’ with a hammer. Thereafter drank a poisonous substance suspected to be sniper which led to his death.

“Photograph of the scene were taken, the hammer and bottle of the sniper were recovered as exhibits. Investigation is ongoing.”