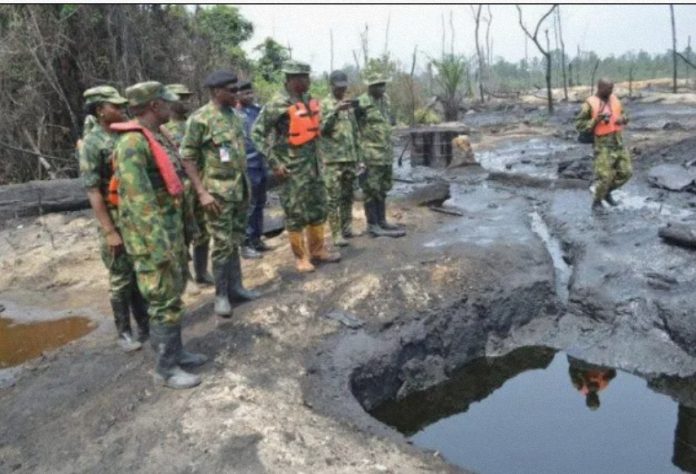 The operation carried out by a team under Operation Dakatar Da Barawo is part of the navy’s efforts to eradicate oil theft and illegal bunkering in the Niger Delta region.

Director Naval Information, Commodore Ayo-Vaughan, confirmed this in a statement on Thursday, where he said the squad has made breakthroughs in which over N10 billion worth of stolen crude oil and petroleum products was seized.

Part of the statement reads; “The period under review also brought to fore the resort to armed resistance by the economic saboteurs and criminals particularly at Okarki, a border community between Rivers and Bayelsa states. This development will not deter the Nigerian Navy from enforcing zero tolerance for economic sabotage and criminality in Nigeria’s maritime environment particularly at the backwaters.

“On May 1, 2022 therefore, Nigerian Navy Ship (NNS) PATHFINDER at Port-Harcourt conducted swamp buggy operations in Cawthorne Channel to clear identified refining sites. The Base intercepted one wooden boat laden with unspecified quantity of illegally refined AGO at Isaka.

“On May 2, 2022, the Base arrested 12 suspects, 3 wooden boats and one speed boat laden with illegally refined AGO. Equally on Tuesday, May 3, 2022, NNS PATHFINDER raided Tongolonsoju and Sokko communities. Credible report had indicated that the two communities serve as critical enablers to the notorious market square illegal refining camps.

Ayo-Vaughan also said that the suspects have been handed over to the relevant authorities for prosecution.