The Commander of the Joint Task Force in the Niger Delta, Rear Admiral Aminu Hassan while briefing journalists at its headquarters at Igbogene, Yenagoa confirmed the camp is operated by a suspected notorious militant leader, Endurance Amaegbe. 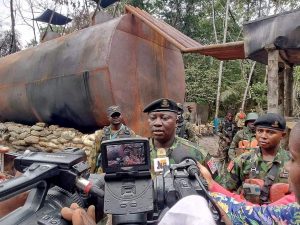 Rear Admiral Hassan said a major pipeline conveying crude oil and other critical infrastructure has been vandalized several times by the suspected militant and his group who are bent on operating the illegal refinery, a situation he described as economic sabotage to the country.