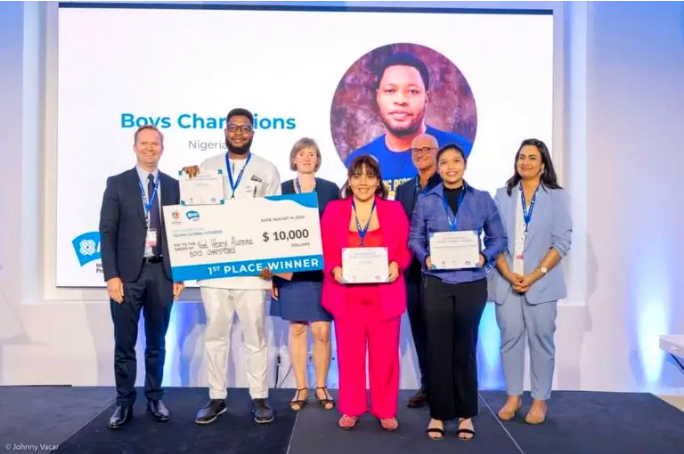 A Nigerian student identified as Noel Ifeanyi Alumona, studying in the United States, has won the 2022 AFS Award for Young Global Citizens. He is the first African to win the prize since its inception in 1914. The award was presented during the International Youth Day organized by the United Nations Global Communications Department, the AFS Intercultural Programs and The Youth Assembly at the United Nations headquarters in New York.

Noel, who is studying in Vanderbilt University, United States, was presented a cash prize of $10,000 in recognition of his campaign to end violence against women and girls through proper orientation of boys on responsible behaviour.

The AFS Award for Young Global Cituizens recognizes the work of young people around the world for their commitment in improving the global community and contribute to a more just, peaceful, and tolerant world. Aside the star prize winner, Mariana Reyes and Larissa Cevallos emerged second place winners with $2,500 prize award.

Noel, who hails from Enugu State, beat other 500 contestants after a strenuous and rigorous selection process and interviews, from where 10 finalists were selected from over 200 applications.

The winner, who is also a 2018 Obama Foundation Fellow of the African Leaders programme, explained that the inspiration for the formation of Boys Champion came in 2018 after his meeting with Barack Obama in Johannesburg as an Obama Foundation Fellow. It was an encounter that transformed his worldview and ignited in him the flaming zeal to make a positive impact in his community.

On October 1, 2018, he formed the Boys Champions as a youth focused group committed to providing safe space for young boys and training them to become part of the solution to ending societal violence and prejudice against women and girls in Nigerian communities.

According to him, some obnoxious cultural and religious practices infringe on women’s rights, for which Boys Champion launched the campaign for change.

Noel, who is presently pursuing a graduate degree in Special Education in the United States, said he has remained passionate about youth development, education and more specifically on ways to improve access to quality education in underserved communities.

As part of the mentorship programme targeted at youths, he said his organization would organize a leadership conference in Enugu State where speakers from the United Nations, Harvard University and Vanderbilt University would tutor participants on leadership. He urged the Nigerian Diaspora Commission, government agencies and corporate organisations to key into the project for youth empowerment and training of future leaders.