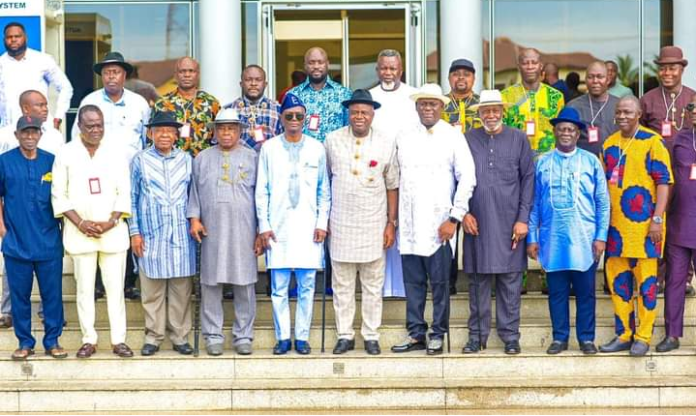 The Bayelsa State Governor, Douye Diri, alongside leaders of the Ijaw National Congress (INC) and other stakeholders calmed the tension arising from the pipeline surveillance contract awarded by the Federal Government to High Chief Government Ekpemupolo aka Tompolo.

Diri said leaders of the Ijaw nation and other ethnic nationalities in the Niger Delta have resolved to work together to protect federal government facilities in the region.

The governor stated this at the end of a meeting of critical Ijaw stakeholders led by the INC President, Prof. Benjamin Okaba, in Government House, Yenagoa.

In a statement by his Chief Press Secretary, Daniel Alabrah, Diri noted that the meeting examined the various issues that threatened the unity of the Ijaw nation, following the award of the pipeline surveillance contract to Tompolo’s firm.

He explained that the meeting was held to foster peace and unity within Ijaw land, adding that all parties agreed to sheathe their swords.

Tompolo, King Ateke Tom and Chief Dokubo Asari had representatives at the meeting

The governor said “I am happy that the issue has been put behind us. Beyond building consensus, all hands must be on deck to protect the oil pipelines.

Today, we have seen the end of the matter. Before now, there was a deafening silence in the INC. But today, that voice is resonating and I thank all Ijaw leaders that took it upon themselves to ensure that Ijaws do not fight themselves.

“Tompolo and Asari are brothers. We have all come to a consensus to protect all federal presence, especially oil pipelines in the Niger Delta, as we sue for peace to attract development.”

He also commended Okaba and others for demonstrating leadership.

At the end of the meeting, the INC issued a communique titled: “We are stronger together” and was read by Okaba.

According to the communique, a five-man reconciliatory committee was constituted to interface with the various groups and individuals on the pipeline surveillance issue.

It further noted that Ijaw people were irrevocably committed to the peace, unity and stability of the ethnic group and other nationalities in the Niger Delta.

The communique stressed the people’s determination not to allow the pittance in the guise of oil pipeline surveillance to create an arena of in-fighting and bloodshed in Ijaw land before, during and after the execution of the job.

The meeting also agreed that Ijaw nation would collectively stand against oppressive issues and obnoxious legislation to safeguard the future of the people.

Such issues include the re-introduction of the National Water Resources Bill, the Petroleum Industry Act 2021, the non-constitution of a substantive board for the Niger Delta Development Commission (NDDC) and the politicisation of the Nigerian National Petroleum Limited with a lopsided board.

It called on the federal government to fast-track the realisation of the proposal for the establishment of modular refineries to put an end to illegal refineries and pollution of the environment.

Other stakeholders in attendance were Senator Emmanuel Diffa, Emeritus Professor Alabo Dagogo Fubara, Chief Kennedy Odiowei as well as representatives of Farah Dagogo and ‘General’ Horsfall Olali among others.