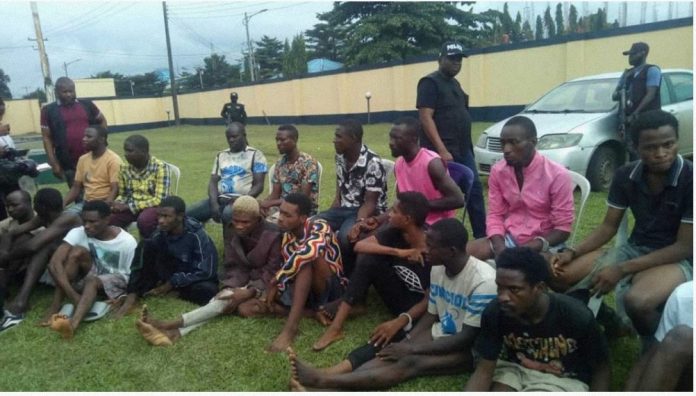 Operatives of Rivers State Police Command have reportedly arrested over 30 suspects linked to different crimes across the state.

This information was disclosed by the state’s Commissioner of Police, Eboka Friday, at the parade of the suspects at the Command, yesterday.

He also said some of the suspects were involved in car theft, kidnapping and attempted procurement of arms among other crimes.

The commissioner noted that operatives of the C4i Intelligence Unit, while on intelligence report, followed up a case where one David Kalu Onyems, ‘m’, was kidnapped between Abia and Rivers State boundary on May 19, 2022, by a kidnap syndicate of 12 teenagers and on June 2, arrested one Ubong Emmanuel, who confessed to the crime and led the operatives to a shallow grave, where the victim was buried.

One of the suspects, Goodness Kalu Smart, male, 18 from Abia State, said: “I was involved in the kidnapping and the idea came from my boss. His name is Donald. He is from Rivers State. He introduced me to the kidnapping team and made us swear an oath.

“The first kidnapping job we did, I did not go with them but I slept in the bush with the victim, the same with the second job but the third one I was fully involved.

“After the victim died, our boss told us that since the man had died there was nothing for us. After three days, unknown to me our boss collected the man’s Sim card, he called me to go and pick up a package for him, which I did without knowing the content of the parcel.

“ I went to the place and I met a man who gave me a bag filled with money and according to the man, he said it is N2 million. Mr. Donald took the bag from me and I did not know it was from the man that died.

“So, after weeks I heard that two of my friends were arrested only for me to visit my mum a day after on the Saturday I was arrested alongside my mother.”

Meanwhile a child and seven kidnapped victims were rescued.