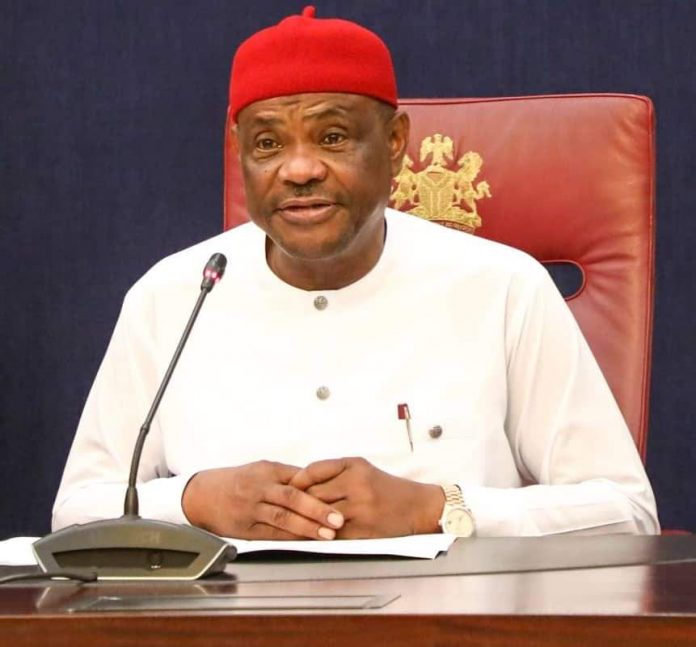 Rivers State governor, Nyesom Ezenwo Wike, has said the State has obtained intelligence reports that some misguided politicians have started recruiting cultists, ex-convicts and thugs in furtherance of their political aspirations for 2023.

The governor said the State government is aware that owners of hotels and entertainment centres are in the process of giving out their premises to politicians and political parties as a convenient base for the gathering of these political thugs across the State.

Governor Wike, in a state broadcast on Sunday emphasised that the State government is not taking intelligence reports at its disposal lightly, and will therefore not allow any politician, no matter his previous or present position, the chance or opportunity to upset the prevailing peace and security in Rivers State.

“Similarly, we will not allow any political party, be it the All Progressives Congress, the Peoples Democratic Party or the Social Democratic Party to threaten the safety and security of lives and property during the campaigns with mayhem, thuggery or violence.

“Accordingly, we have already alerted and set the security agencies on the trail of these misguided politicians and leaders of political parties and stop them in their tracks with the full weight of the law.

“We also wish to warn owners of hotels and proprietors of relaxation centres to take notice and desist from releasing their facilities for politicians and party leaders to use to meet and plot against the peace, safety and security of our State.”

The governor warned that the State government will pull down hotels and other entertainment places that are linked with such criminal political activities.

“I wish to reiterate our unwavering commitment to safeguarding the sanctity of lives and property throughout the State and to reassure everyone that we shall continue to spare no effort to keep Rivers State safe and secure.

“We urge residents to be vigilant while going about with their normal activities and promptly report any suspicious gatherings or movements in your vicinity to the attention of the security agencies for necessary action.”

Governor Wike commended the people of Rivers State for the overwhelming support and solidarity they have given to his administration since May 2015 till date.

“I wish to reiterate that our commitment to the shared covenant for a new, secure and prosperous Rivers State remains strong as ever and we will neither relent nor waiver in our determination to deliver all that we set out to achieve to advance our security, progress and prosperity before the end of our administration.

“We have done so much and achieved a lot in the last seven years but there is still much more to be delivered. I can assure you that, and as you are witnessing, we will continue to deliver meaningful projects until our last day in office.

“As you all know these are very turbulent times in the history of our country as the level of insecurity across all parts has never been this bad.

“Nevertheless, we thank God Almighty for the prevailing high level of peace and security in Rivers State relative to the near calamity that has befallen most other parts of the country.”

Governor Wike also applauded security agencies, for their efforts, courage and dedication to keeping Rivers State substantially safe and secure in the face of very daunting operational difficulties that they face, including the lack of adequate support systems and motivation from the Federal Government.

“The government and the security agencies have laboured hard to secure the prevailing peace and security, which we are determined to sustain for the benefit of the progress of the State and the wellbeing of our citizens.