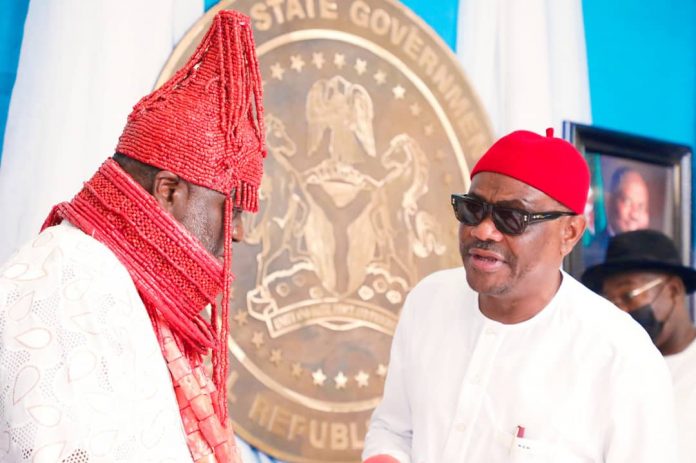 This was contained in a statement signed by Kelvin Ebiri special media assistant to the State governor.

Governor Wike said there is greater gain communities can derive when they notify the State government of any dispute they may have with oil companies operating in their areas.

He observed that most communities take to violence and think it is the best way for them to get what they want from any company.

Governor Wike stated this when members of the Ogba traditional council and stakeholders formally introduced His Eminence, Nwachukwu Obuoha Nnam-Obi, III,  Oba of Ogbaland to the governor at Government House, Port Harcourt on Friday.

“It is not when you go and blowup oil pipelines or gas pipelines that you get what you want to get. No community can do it alone.

“There is nothing wrong with you liaising with government to make sure companies fulfil their promises and whatever is provided in the Memorandum of Understanding (MOU). You need government to give you support.”

Governor Wike said the support the state government can give should first be sought by the community, which will enable them not to take the laws in their hands.

He pointed out that any community that engages in avoidable violent protests against any company can also not use such to intimidate government because they will be left to their fate.

“Because if you recongnise the government, the first thing you will do is to let government know that these are your grievances against the companies operating in your domain.

“It shouldn’t be to just go and take the action and say government will come. I will not come. But you get the support if you don’t take the laws in your hands.”

Governor Wike advised the new Oba of Ogbaland to recongnise the enormous challenge that comes with superintending over a large ethnic group in the State.

The governor urged him to walk in the footsteps of his late father who, when he reigned, consulted with government regularly, carried his traditional office with dignity and was respected across the country.

Governor Wike also charged the new Oba to be a man of peace, exude intelligence like his late father and make sure that Ogba people live in peace.

“I hope you will continue that way. Your business is the interest of your people and make sure that your communities are in peace.”

Governor Wike also directed the State Attorney General and Commissioner of Justice, Prof. Zacchaus Adangor and the State Commissioner of Chieftaincy and Community Affairs, Soni Ejekwu to issue certificate of recognition and staff of office to the new Oba of Ogbaland as a first class traditional ruler.