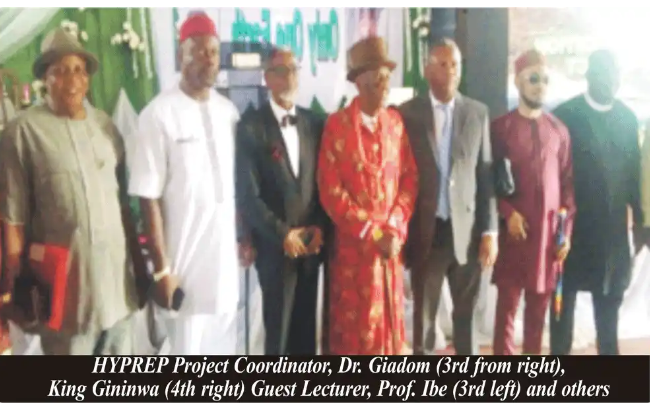 Hydrocarbon Pollution Remediation Projects (HYPREP) has begun the collection of data to determine their health status and administer Medicare as the case may be.

This cheery news came to the fore on Monday during the commemoration of this year World Environment Day which held at the Suanu Finimale Nwika Memorial Hall, Bori, Khana Local Government Area.

Speaking at the event themed: ‘Only One Earth’, the Projects Coordinator of HYPREP, Dr. Ferdinand Giadom Pointed that the Ogoni people had contracted killer diseases like cancer and hormonal imbalances as a result of chronic exposure to gaseous emissions, making it difficult for many women to conceive and bear children.

Dr. Giadom said HYPREP had secured the approval of President Mohammad Buhari to engage medical doctors from Ogoni and in the diasporas to visit Ogoni communities and obtain their health status.

He told the audience which had traditional rulers led by the Chairman of the Ogoni Supreme Council of Traditional Rulers, King G.N.K. Gininwa; Khana Council Chairman, Dr. Bariere Thomas, Assembly member, Hon. Dumle Maol, students of Birabi Memorial Grammar School and those of Ken Saro Wiwa Polytechnics, Bori and a host of others, that the doctors would enter into communities in the coming days to obtain information on prevalent diseases in the area, urging them to give them the right information when they come.

The Projects Coordinator also disclosed that HYPREP would upgrade all medical centers in Ogoniland, adding that land has been acquired in Tai Local Government Area to build an ultramodern medical center where the sick would be treated.

He further disclosed that in line with the proposal of the UNEP Report, a Center of Excellence would be built, even as he said the architectural design is ready and the site already donated and would be located along the Bori-Kono Road.

Earlier in his welcome address, Chairman of Khana Local Government Area, Dr. Bariere Thomas appealed to Ogonis to protect the environment as that is the only place given them for habitation.

He said it is also a known fact that it is only here on earth that life exists, urging Ogonis to support HYPREP so they would return the environment to what it used to be.

The guest lecturer and retired UN Diplomat, Prof. Chidi Ibe in his presentation, chronicled the devastating impact of environmental pollution and its effect on humanity, especially on the Ogoni environment.

The globally renown environmentalist who spoke on the subject: ‘From Stockholm 1972’, enumerated the intervening approaches by governments and agenciesup to 2015 when the UNEP Report was released to remediate the Ogoni environment, and urged the people to cooperate with the new Projects Coordinator of HYPREP, Dr. Ferdinand Giadom, whom he described as God-sent to Ogonis.

Highlight of the programme was the inauguration of Environment Clubs for KENPOLY and BMGS, all in Bori. The audience was thrilled to cultural display by the popular Akuni Cultural Group of Kpong community, in Khana Local Government Area.