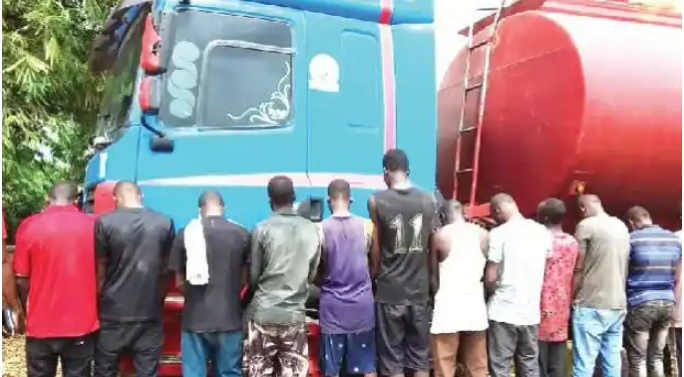 The Akwa Ibom State Command of the Nigeria Security and Civil Defence Corps on Tuesday said it arrested 14 suspected smugglers and impounded 1,700 litres of adulterated Automotive Gas Oil (diesel) in the state.

The suspects were arrested on March 10 and 14, 2022, in Itu and Onna local government areas of the state, respectively.

Parading the suspects on Tuesday, the state Commandant, Mr Abidemi Majekodunmi, lamented the damage the smugglers were doing to the economy.

“In our custody, we have 14 suspects and we also have as exhibits four trucks laden with suspected petroleum products.

“In total capacity, we have 1,700 litres of AGO inside the trucks. They were accosted in four different locations. Three of them fall within Itu LGA, while the fourth one was arrested in Onna LGA of Akwa Ibom State.

“Definitely, we are suspicious of the content of the trucks. From our preliminary investigation, we suspect that these are adulterated petroleum products. We are working on the suspicion that they may be stolen products.

“Investigation is underway and we want to tell Akwa Ibom people that there is no breeding space for criminals and vandals in the state,” he said.