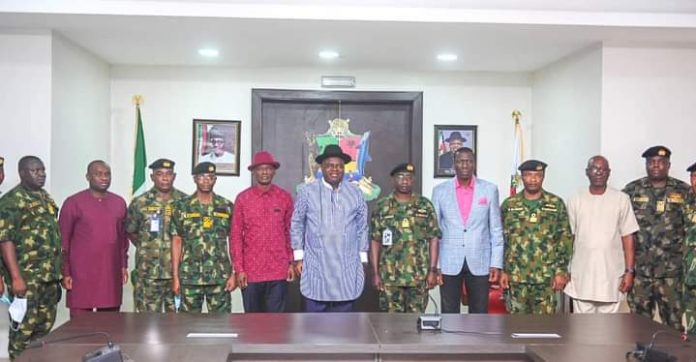 Bayelsa State Governor, Douye Diri has said insecurity in Nigeria is worse at the moment than it was in 2015 when the All Progressives Congress (APC) took over power in the country.

In a statement signed by Daniel Alabrah,
Chief Press Secretary to the Bayelsa State Governor, Diri called on the Federal Government to redouble its effort at combating insecurity, particularly in the northern part of the country.

The governor stated this on Tuesday during separate courtesy visits of heads of some security agencies to Government House, Yenagoa.

Diri “I use this opportunity to again call on the Federal Government to do something. These are the same issues that led to the APC government coming to power in 2015.

“I am sure that you will agree that things are worse now than in 2015. The Federal Government has to redouble its effort. Otherwise, the joker card is with the people of Nigeria. They know what to do come 2023.

“When one part of the country is sick, it affects the other parts. Kaduna and other states in the North are sick security-wise and it is affecting other parts of the country. Nigeria is very close to the Thomas Hobbes’ ‘state of nature’ where life is described as nasty, brutish and short. The Federal Government has to do something to keep us away from the Hobbesian state.”

Speaking when he received Comptroller of the Nigeria Immigration Service, Bayelsa Command, Mr. Sunday James, the Bayelsa helmsman lamented the level of insecurity in the north, saying once a part of the country is in distress, other areas are also affected.

Welcoming the new Comptroller, Senator Diri called for more synergy between the service and the state government, especially in the areas of security and investment drive.

According to him, his government had put measures in place to ensure that investments thrive in the state, and expressed the optimism that with collaboration with the service, Bayelsa would be the destination of choice for investors.

He explained that the relative peace being experienced in the state was as a result of collaboration among security agencies and urged the new Comptroller to toe the same path.

He acknowledged that having served in the Command in other capacities, Rear Admiral Abbas would contribute significantly towards sustaining the peace and development of the state.

While congratulating him on his appointment, the governor also urged him and his officers to discharge their duties with a high sense of professionalism and should not allow themselves to be influenced by partisan politics.

Earlier, Rear Admiral Idi Abbas said his visit was to officially present himself to the governor following his posting to head the Command on February 4 this year.

Rear Admiral Abbas expressed gratitude to the state government for its support to the Command and appreciated it for the donation of land to build a referral hospital, adding that the secondary school allocated to the Navy would be taken over completely in no distant time.