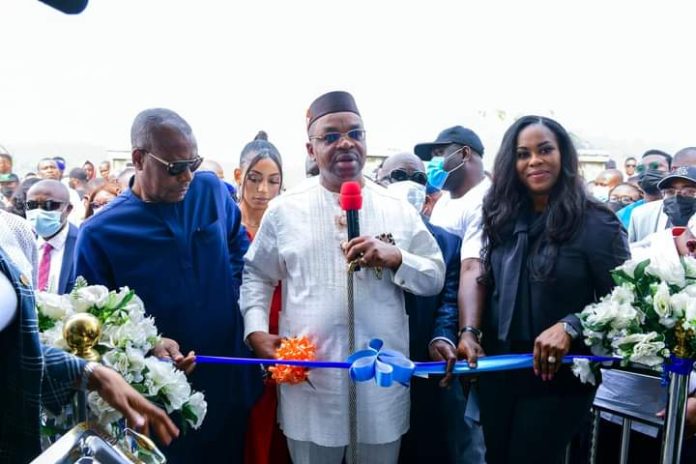 The governor who spoke at the commissioning of Spectrum TV, the first private owned television station in the state and Head office of TAF Media Group located at Ibiaku Uruan, tasked the management of the TV station to uphold best conventions of broadcast journalism for the continued unity and growth of the state.

He commended the pioneering spirit of the Chairman of TAF Media Group, Mr. Tony Afia and his entire Management team on the establishment of the first privately owned television station in Akwa Ibom and Cross River states, after pioneering the advent of private radio stations in the state in April 2013.

“I really appreciate your spirit of entrepreneurship. I appreciate your courage in taking this bold step. I love it when people have a vision and they pursue that vision vigorously. I also appreciate people who have traceable foundation of hardwork”, he added.

He also solicited for understanding and patience from the people of Uruan explaining that efforts are being intensified towards completion of the Nduetong-Ibiaku Uruan road which leads to the Broadcast Station location.

Governor Emmanuel lauded the pace of work on the project assuring that the construction firm was taking advantage of the weather condition to speed up the work, especially at the bridge and directed the supervising Ministry of Works and Fire Service to push for increased efforts for timely completion.

“If you sum up the length of roads I’m doing in Uruan alone, it’s not less than 50km, with a lot of spurs. You can see they’re moving very fast and they’re piling the bridge ahead now, right from the Uyo City Polytechnic area and they have given a promise that I should be able to commission this road soon if the rain gives us two more months”, he said.

Earlier, the Commissioner for Information and Strategy, Comrade Ini Ememobong, described Governor Udom Emmanuel as a courageous leader whose ingenuity and sense of purpose has created enabling environment for the private sector to thrive.

He added that the Governor has encouraged the growth and expansion of media as well as welcomed constructive criticism in his administration.

The Information Boss opined that the emergence of Spectrum TV will project the culture, people and projects of Akwa Ibom State to the world, and used the occasion to commend Mr. Tony Afia for weathering the storm to establish the first private Television in the state, which he noted will remain neutral in its broadcast operations.

The Chairman, TAF Media Group, Mr. Tony Afia expressed appreciation to God for the realization of Spectrum TV dream and to the Nigerian Broadcasting Commission, NBC for granting operating license since 2015.

He specifically thanked Governor Udom Emmanuel for coming to inaugurate the station, 90 days after commencement of official broadcast and assured of content driven programmes for viewer’s delight.

High point of the event was presentation of award of excellence to the governor by TAF Media Group for the massive infrastructural strides in the state.