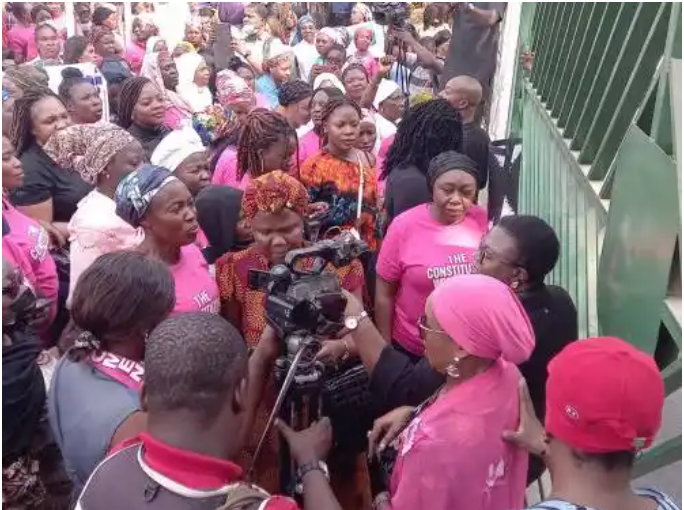 Some Nigerian women on Wednesday March 2nd 2022 took to the National Assembly to protest, demanding for a reconsideration of the gender bills rejected by the lawmakers.

The protesters condemned lawmakers for voting against proposed gender bills on Tuesday, saying the action will deny women the opportunity of inclusion and representation in governance.

Recall that, the National Assembly had rejected a constitutional bill seeking to create special seats for women in the federal legislative arm of government.

The bill failed after both chambers of the national assembly voted on it on Tuesday.

It is entitled “Bill For an Act to alter the provisions of the Constitution of the Federal Republic of Nigeria, 1999 to provide for special seats for women in the National and State Houses of Assembly; and for related matters.”

The bill failed to get the lawmakers’ nod despite enjoying the backing of Aisha Buhari, wife of President Muhammadu Buhari, and Dolapo Osinbajo, wife of Vice-President Yemi Osinbajo.

The First Lady had last week attended plenary alongside Pauline Tallen, minister of women affairs, when the report on the legislation was considered. Dolapo Osinbajo was also present as the senate began voting on constitution amendments.