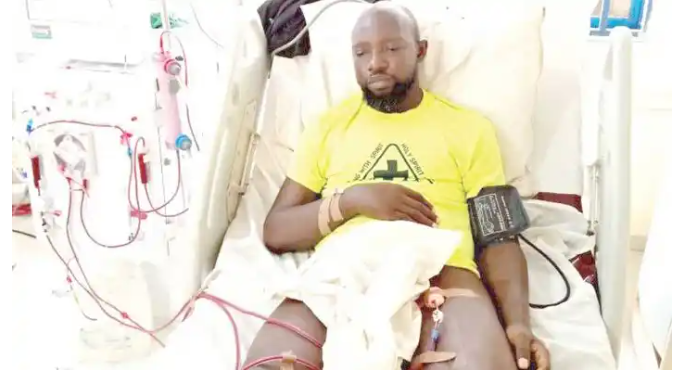 Members of the Performing Musicians Employers Association of Nigeria (PMAN), yesterday, held a rally in Yenagoa, Bayelsa State capital, to raise fund for one of their ailing members.

The member known as Wednesday Timi Tonkumo, aka Lemon Black, have been suffering from end stage renal disease (kidney failure) and needs a kidney transplant.

According to Doctor’s report, Lemon Black needs N20 million for a new kidney transplant and he is surviving right now with three rounds of dialysis each week at the cost of N70,000) per round; a financial burden too heavy for his immediate family to bear.

The scan shows that both kidneys are reduced in size and shows an increased cortical echogenicity with lots of corticomedullary differention. There are no renal stone or hydronephrosis, there are no ascites and the liver gall bladder spleen and pancreas are normal.

In an appeal for support from the Federal Medical Centre, Yenagoa, for the 37- year-old musician and a civil servant, the hospital agreed that the medical bill amount to $40,000, which is too much for an individual to pay.

“This is to affirm that the above named patient of this hospital is suffering from end stage renal disease. Survival is dependent on lifelong maintenance dialysis or kidney transplant.
Both modalities of treatment are very expensive and not within the reach of the average patient,” the report reads.

Speaking at the rally, which took the PMAN members to the State House of Assembly and the Government House in Onopa, the Governor of the Association, Prince Peres Ogbogbo, said the campaign was to appeal to the government, individual and corporate bodies to help save the victim.

Ogbogbo said the man was too young and talented to die now and appealed to the state government and members of the state House of Assembly to come to the aid of the victim.