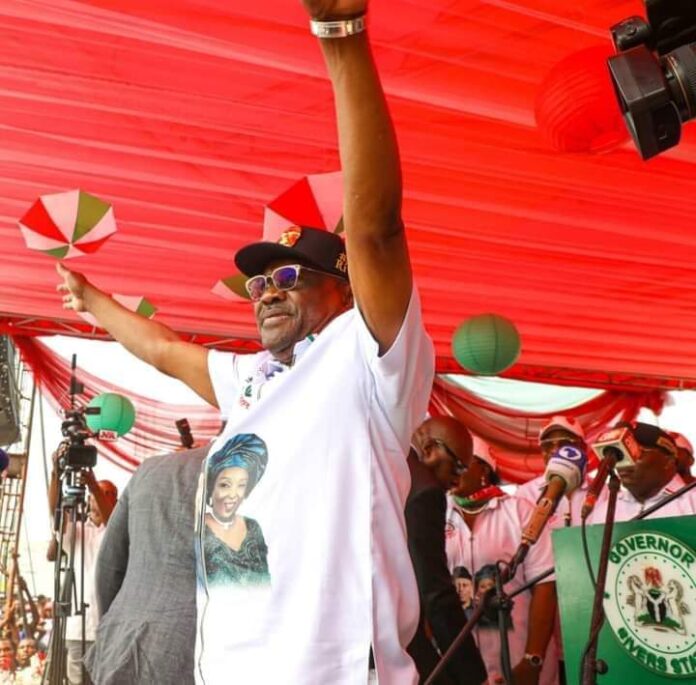 Rivers State governor, Nyesom Ezenwo Wike has hinted that talks with his political allies on the presidential candidate to support in the February 25 election will soon be concluded.

The governor, maintained that the people of the State know their political bearings and will not play second fiddle concerning the general election slated for February 25th and March 11th, 2023.

The governor explained that Rivers people have been duly sensitised and told to vote the candidates of PDP for governorship, Senate, House of Representatives and State House of Assembly.

He informed that the beauty of the forthcoming election is that it will leave no room for any form of electoral manipulation and intimidation from security personnel.

Governor Wike, allegorically, told them to be sure that all votes must be put in one basket in favour of candidates of the PDP in the State.

“Nobody should intimidate you. Nobody should tell you any story. We are free born of this country. We are not second class citizens. Nobody can tell us anything. I dare them. Let anybody do any funny thing, We’ll tell them we are from Rivers State.”

He emphasised that it will be a case of one man, one vote and no blackmail can dissuade or thwart the collective resolve of the people on who to support with their votes.

The governor, who urged the people to be calm, maintained that when the final decision of the presidential candidate the state will support will be taken, Rivers electorate will be notified.

“As we finish from here now, you’ll go home and start working before the appropriate time when we will ring the bell. When you hear the bell being rang, know that the decision has been taken.”

Governor Wike explained that governance is not about story telling but in performance that translates into making living easier for the people and seeing them happy.

He said the successes of his administration is what the consolidation team, to be headed by the PDP governorship candidate, Sir Siminialayi Fubara, will consolidate and therefore, should be elected to continue from where he will stop.

That is why, Governor Wike insisted that the forthcoming election will be a fight to finish so that those who have now placed themselves as enemies of the State, to sell it for pottage, will be taught a lesson.

Governor Wike told the people of Ikwerre Local Government that in 2015 and 2019 he came to seek their support, made promises and have fulfilled all of them with development projects evenly distributed in all the 13 political wards.

The governor said the members of the consolidation team he is asking the people to vote into power are men and women with capacity to continue the tenets of good governance and will certainly not disappoint them.

Governor Wike disclosed that the Rivers State government has awarded contract for the construction of Ubima-Ozuoha road.

In his speech, Rivers State PDP governorship candidate, Sir. Siminialayi Fubara said he is part of the administration of Governor Wike that has provided good governance and driven unequal infrastructural development agenda.

Sir. Fubara pointed out that a vote for him will further be an expression of confidence in what governor Wike has done, which he will consolidate when elected.

“The few roads that are remaining in Ikwerre local government, we will do it. Your health services we will improve on them and upgrade them. On security, you know those days when they kidnap in Elele, they will enter Ubima forest. Today, we have been able to smoke those criminals out and you have peace.”

The Director General of Rivers PDP Campaign Council, Felix Obuah noted the massive show of solidarity by the people at the rally.

He said Rivers people have witnessed the tremendous performance of governor Wike in office and voting Sir Siminialayi Fubara and other PDP candidates will ensure consolidation of the successes of the Wike’s administration.

Rivers State Chairman of PDP, Ambassador Desmond Akawor who presented flags to the various candidates contesting various positions in the Rivers East Senatorial District, described governor Wike as the leaders of the people and emancipator of the downtrodden.

The chairman of Ikwerre Local Government, Dr. Samuel Nwanosike, warned that those who took governor Wike for granted will on 25th February, realise their grant mistake.

In his speech, Chief Mike Elechi said governor Wike has kept his 2015 and 2019 promises of delivery of development projects. He vowed they are resolved to appreciate him as a father and brother by tripling the votes given to him then to the consolidation team.

Also speaking, the State Commissioner for Education, Prof. Chinedu Mmom said those gathered for the campaign rally are all registered voters who as faithful PDP members will vote all the candidates of the party.

On behalf of the women, Mrs. Owhuchuku Obiandu noted how governor Wike had in 2015 promised and ensured that women were brought into mainstream politics in the State. As a show of gratitude, she said women are well mobilsed to vote all PDP candidates in the State.