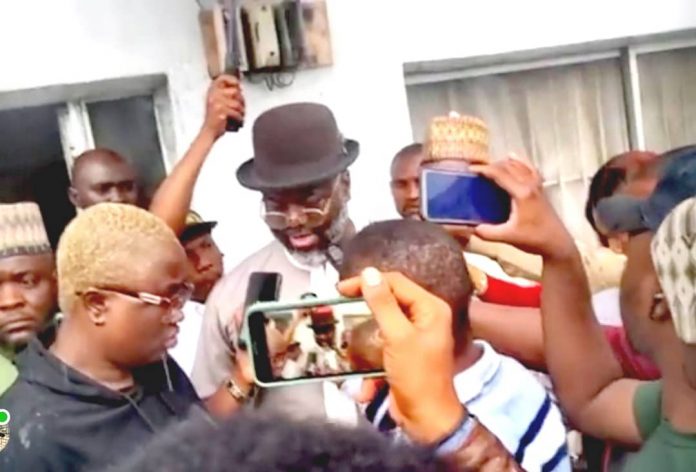 The support base of the Accord Party Governorship candidate, Chief Dumo Lulu-Briggs received a valuable boost today as the Hausa community through her leadership declared support for the grand proponent of the WE AGENDA initiative at the Sariki’s palace in Port Harcourt.

Chief Dumo Lulu-Briggs was at the Sariki Hausa, Rivers State, Alhaji Issa Madaki’s palace to mark the EID-AL-ADHA celebration with members of the community. Speaking on behalf of the organization, the spokesman, Alh. Haliu Uman, stated that the Hausa community will only support a credible candidate who is detribalized and willing to carry every Rivers person along irrespective of their tribe and religion: “this time around, with the new electoral act, we are not looking for party, we are looking for the personality. We really appreciate him, he’s part of us. We are going to tell our people to vote for him” he said.

Speaking to newsmen, the Accord party candidate, Chief Dumo, noted that his purpose for visiting was to celebrate sallah with members of the Hausa community.

He reiterated his commitment to recognizing every Rivers resident as part of the Rivers project. He said thus: “I came to celebrate with my family, the Hausa community in Rivers State. By the special grace of God, when we win the election, we must remember that the Hausas and the Fulanis and all other tribes that live amongst us are part of the Rivers story. They are Rivers indigenes; how do you tell Baba (Sariki Hausa, Alhaji Issa Madaki) that he’s not a Rivers man? He’s been here since the 60s and the 70s. By the special grace of God, when we win elections, we’ll take it a step further by ensuring that for the first time we have someone from the Hausa extraction as Commissioner in Rivers State. We have said that in the government we are going to form, we shall use the best to work for the rest of us. So, if the best is found amongst our northern brothers, then we’ll use that person to develop the state. That is the type of state we want to build; a state without borders; where everybody is welcomed.”

About the strength of his party, Chief Dumo Lulu-Briggs declared that the party is growing in strength and gave instances of how people are making various donations including party secretariats to show their support and be part of the success story. The Accord Governorship candidate added emphatically that Accord party is not a third force but rather the solution.