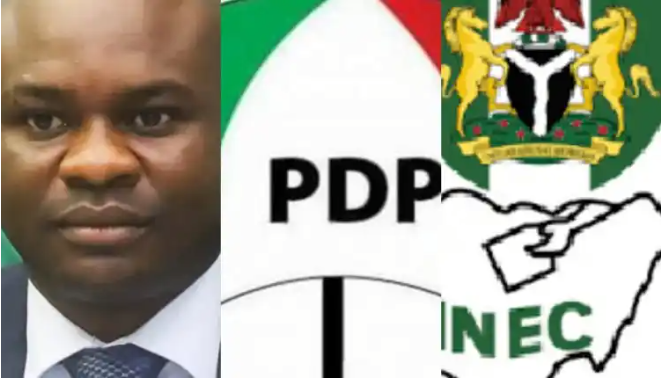 The governorship aspirant on the platform of the Peoples Democratic Party, PDP, in Rivers State and Member representing Degema/Bonny Federal Constituency in the House of Representatives, Hon. Doctor Farah Dagogo, has dragged the Peoples Democratic Party (PDP) and the Independent National Electoral Commission (INEC) to court following his exclusion from the list of governorship aspirants in Rivers State.

The Federal lawmaker who is being detained at the Port Harcourt Correctional Centre, is standing trial on two count of conspiracy to felony and cultism at the Federal High Court Port Harcourt.

Though he had pleaded not guilty to the charges, he had yet to be granted bail in the State High Court.

Dagogo, in a motion on notice filed at the Federal High Court, Abuja, is seeking an order of interlocutory injunction restraining PDP from using any list of aspirants without his name to conduct the May 26th primary election pending the hearing and determination of the substantive suit.

He is also seeking an order restraining INEC from accepting any candidate, who might emerge from the primary election conducted without his participation.

Meanwhile, in a developing story a Federal High Court, sitting in Abuja today, May 23rd, 2022 ordered the Peoples Democratic Party, PDP, and the Indpendent National Electoral Commission, INEC, to show reasons why the party’s gubernatorial primaries should hold in Rivers State without the plaintiff, Hon Doctor Farah Dagogo.

Justice Taiwo Taiwo in suit no FHC/ABJ/CS/654/2022 ordered the PDP and INEC to show cause on May 24th 2022 why Hon. Doctor Farah Dagogo’s application seeking injunctive orders against the PDP and INEC in respect of the PDP gubernatorial primary election for Rivers State should not be granted.

Dagogo had filed a suit on March 12, 2022 challenging his prevention from the screening exercise of his party (PDP) for the on coming gubernatorial primary election for Rivers State having submitted all the required documents.

The presiding judge in the sitting of the court on Monday granted the order for INEC and PDP to show cause why the primaries should not be stopped.