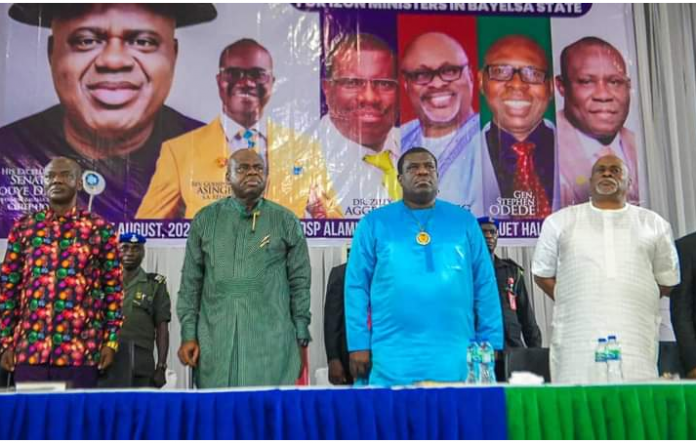 The Bayelsa State Governor, Senator Douye Diri, has urged Christian leaders to promote unity and peace in the state and within the body of Christ generally.

Diri gave the counsel on Monday at a one-day Prayer Summit/Dinner for Izon Ministers in the state.

The summit, which was the first of its kind, had in attendance over 1,300 leaders from different Christian denominations.

A statement by his Chief Press Secretary, Daniel Alabrah quoted Diri as charging them to imbibe and promote the spirit of brotherliness across Ijaw land for the common good of all.

He also admonished the indigenous ministers to work in peace and unity to enhance stability and sustainable development not only in Bayelsa but also the entire Ijaw nation.

“When I was National Organizing Secretary of the Ijaw National Congress, one thing I noticed whenever I travelled was that the Ijaw people lived in close settlements and, so, they were close-knit families across Ijaw land. But we are fast losing all of that.

“Unity is exemplified by the ants. When they come together, they become more productive. Let this continue to live in our hearts now that you have come together as one body,” he said.

The governor also spoke on the importance of forgiveness, which he noted was one of the cardinal teachings of Jesus Christ.

According to Diri, the summit ought to mark the turning point for all Ijaws to take their pride of place in religion, politics and other spheres of life by exhibiting character worthy of emulation.

In his sermon, Rev. Tuesday Emmanuel of Doxa Family Church enjoined Izon ministers to strive to keep the bond of peace.

He noted that God commanded his people to love one another, adding that one of the cardinal points that propel unity was character.

He urged fellow ministers of the Gospel to continue to propagate Christ rather than self at all times.

In his remarks, the convener of the summit, Rev. Godspower Asingba, said the objective was to bring Christian leaders in the state together to foster unity and peace in the body of Christ.

Asingba, who is the Special Adviser to the Governor on Religious Affairs, noted that for a long time, the ministers in the state had apparently worked at cross purposes and that it was imperative that they work together in the interest of the development of the state.