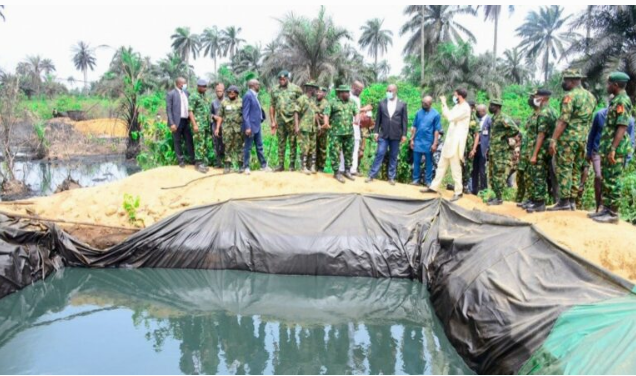 The Federal Government says it is determined to stop the economic devastation occasioned by the activities of illegal refiners, pipeline vandals and crude oil thieves in the country.

The Minister of State Petroleum Resources, Chief Timipre Sylva, said this on Wednesday at Bonny Island, Rivers, while addressing officers of the 146 Battalion and other security agencies represented in the fight against oil theft.

Sylva who was on an assessment tour on some illegal refinery sites at the Niger Delta region creek with the Chief of Defence Staff, Maj.- Gen. Lucky Irabor, and Group Managing Director, NNPC, Malam Mele Kyari, among other dignitaries.

Sylva said President Muhammadu Buhari had directed that the illegal activities must stop and had called for an assessment of the devastation occasioned by the activities of the criminals.

Addressing officers of the 146 Battalion, Sylva said, “you are here on a mission, I commend you for all the good work you have done our nation depends on this asset to survive , oil and gas is one of the major sustaining asset of the country.

“Unfortunately, we have had a lot of insecurity around oil facilities and pipelines, this can no longer be condoned. Mr President has directed that this must stop.

The minister said the final solution to the problem required three elements which included involvement of the community, the government security and the operating companies.

He said the government was determined to stop it because it could not afford the continuation of the insecurity in the industry adding that the criminals have their days numbered.

Also speaking, the Chief of Defence Staff, Maj.-Gen.Lucky Irabor, said the assessment became necessary because of the economic loses being witnessed in the oil and gas sector.

Irabor said the economic losses were so huge and currently the economy of the country was bleeding.