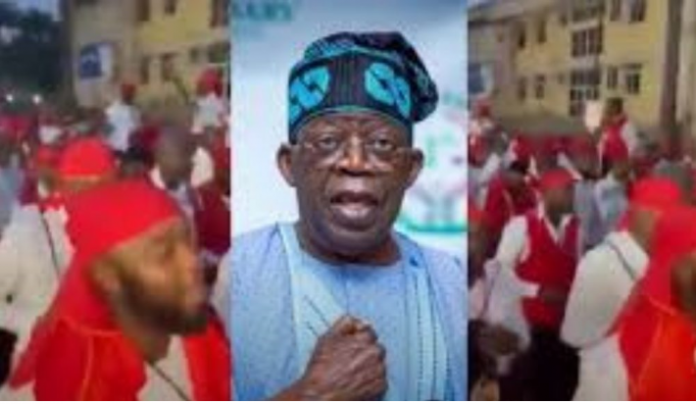 The National Association of Seadogs (Pyrates Confraternity) has said the viral video mocking the All Progressives Congress (APC) presidential candidate, Bola Tinubu is being taken out of context for political gains.
The organization condemned in very strong terms those making political gains out of the video, insisting that it is apolitical and does not have any preferred candidate for the upcoming 2023 presidential elections.

Recall that on Monday, August 8, a video of members of the Confraternity holding a procession in which they could be seen gyrating to an anti-Tinubu song and poked fun at Tinubu for a speech he made in June in Abeokuta, Ogun State, where he asked that power should be handed over to him.
Tinubu had in his speech in Abeokuta said ”Emi lo kan’, which means ”It’s my turn’. During his speech he also mentioned how he consoled President Muhammadu Buhari after he had lost the presidential election thrice and pledged to make him President come 2015.

The lyrics of the song the pyrates sang read;
”Hand dey shake, leg dey shake, Baba wey no well, e de shout emi lo kan (Hands are shaking, legs are shaking. A sick old man is shouting ‘it’s my turn’).
Emi lo kan (2ce), Baba wey no well, him dey shout emi lokan (It’s my turn (2ce), a sick old man is shouting ‘it’s my turn’”they sang
Some Nigerians including Professor Wole Soyinka who is one of the founders of the group found the lyrics distasteful. Soyinka in a statement condemned the song and said it was ”frankly appalling”.

In a statement titled ‘Setting the Records Straight’, the NAS Capoon, Abiola Owoaje, said the organization had a procession to round up its 46th Annual General Meeting as its customary in all events in like manner for the past 46 years, adding that no aspect of its procession was political.
“Part of the annual general meeting was the review of our entire advocacy, humanitarian and operational activities for the year. This, then, as usual, culminated in a celebratory procession, an aspect of this yearly process that we have undertaken for the last 46 years. In our view, it proceeded without event, until this extremely limited video made this appearance.

Quite contrary to the manner in which certain aspects of the video are being portrayed, no aspect of this procession or the event itself was political. Rather it was the typical climax of our annual general meeting. At no time in the history of this organization has this event, or indeed any of our events had any slanted political leanings” he said

Owoaje clarified that the organization does not mock or discriminate against the physical condition of any person as it also has members who are physically challenged. “We must stress that we are apolitical. As an organisation, we have never had a preferred candidate in any political elections including the upcoming 2023 general elections. We have members who belong to different political parties and are absolutely free to support any candidate of their choice.

It is most unfortunate that political capital is being made of this with interpretations that are totally at variance with the philosophy of the Pyrates Confraternity. Unequivocally, we condemn this in very strong terms.

We understand that political merchants desperately seeking media mileage are all over the place misinforming and twisting events to suit their political agenda. However, we wish to re -emphasise that the National Association of Seadogs (Pyrates Confraternity) are not supporting or backing any candidate for the office of the President or any other office in the 2023 general elections and beyond.
As an organisation in tune with disadvantaged and voiceless people, we are committed to the enthronement of a just society in which no one is discriminated against based on tribe, religion, gender or disability. We are against conventions that are moribund. We have always stood for Humanistic ideals, comradeship and chivalry. Nothing that has happened can and will change that posture.

We are determined to continue to use our social programmes, intellectual platforms and our compelling songs to advocate for good governance and accountability!”

Share
Facebook
Twitter
Pinterest
WhatsApp
Previous articleGov. Diri Inaugurates Ekeremor Office Complex, and orders the inclusion Ekeremor Secondary School in next renovation of SUBEB jobs
Next articleNigerian Singer 2face pens down apology message to his family for being an Embarrassment