Queen Elizabeth II is laid to Rest at Windsor Castle 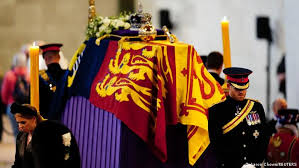 In what seemed like a global celebration, The nation paid a final farewell to Queen Elizabeth II, with a state funeral and military procession.

The day began with final respects being paid by members of the public who had queued up to see the Queen’s lying-in-state in Westminster Hall.

Then, in a spectacle not seen for generations, her coffin – on the State Gun Carriage of the Royal Navy, drawn by 142 sailors – was taken in a solemn procession to Westminster Abbey. 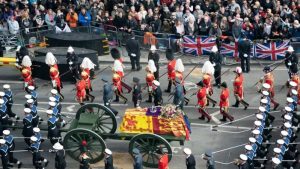 King Charles III walked alongside his siblings, Princess Anne and Princes Andrew and Edward. The Prince of Wales and the Duke of Sussex walked side-by-side behind their father along a route lined by representatives of all parts of the military. 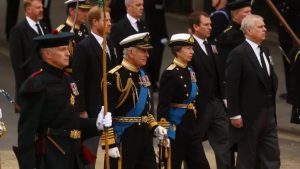 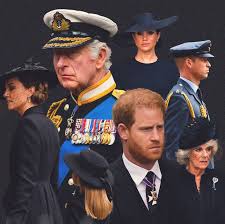 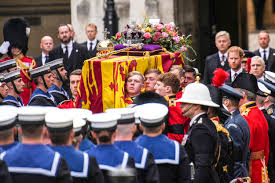 As the funeral procession entered the abbey, world leaders, politicians and foreign royalty stood as her coffin was carried up the aisle to be placed on a catafalque, draped in the royal standard with the Imperial State Crown, orb and sceptre on top.

Prime Minister Liz Truss and her husband Hugh O’Leary were present alongside cabinet ministers and all of the UK’s surviving former prime ministers, seated in the abbey’s quire.

The Emperor and Empress of Japan also attended, alongside other overseas royalty including Malaysia’s King and Queen and King Abdullah II and Queen Rania of Jordan.

As the abbey service came towards its end, the Last Post was played – by the same musicians who performed it at the Duke of Edinburgh’s funeral at Windsor last year – before the nation came to a standstill for two minutes’ silence.

The Queen’s piper then played a traditional lament before the King stood silently as the national anthem was sung.

Among the personal touches at the ceremony was a handwritten message from the King, which was placed on top of the coffin in a wreath of flowers cut from the gardens of Buckingham Palace, Highgrove House and Clarence House at his request. It read: “In loving and devoted memory. Charles R.” 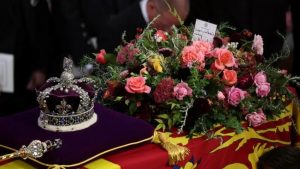 After the funeral, the Queen’s coffin was taken by gun carriage to Wellington Arch and then on to its final journey to Windsor Castle and a committal service.

The committal service was conducted by Dean of Windsor David Conner, with a blessing from the Archbishop of Canterbury.

The Queen was laid to rest on Monday night together with the Duke of Edinburgh at a private family service in the King George VI Memorial Chapel, located inside St George’s Chapel, a statement on the Royal Family’s official website said.