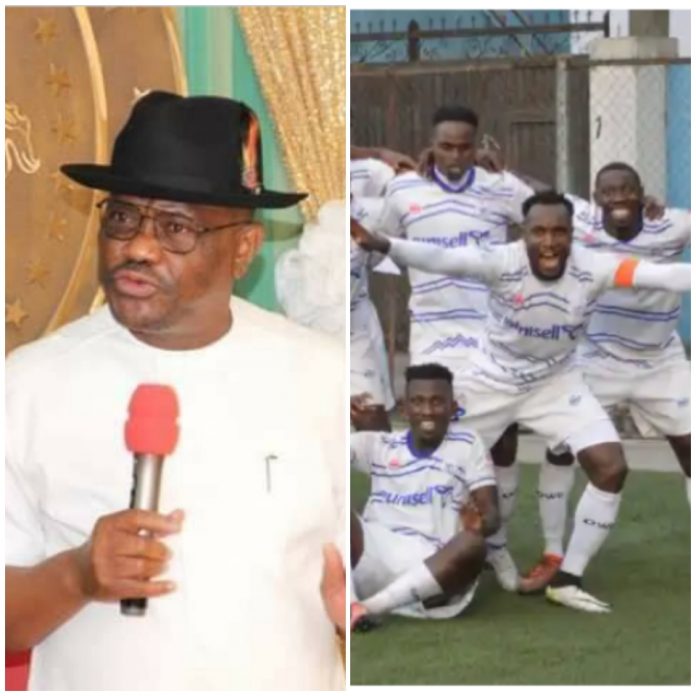 The Rivers State Governor Nyesom wike has congratulated the players and coaching staff of Rivers United for winning the 2021/2022 Nigerian professional football league.

Though, with three matches remaining to draw the curtains for the season. The champions Rivers United sits comfortably at the top of the table with 71points while their contenders plateau United are in the second spot with 10points behind Rivers United.

The Port Harcourt based NPFL side claimed their first-ever league title after Plateau United lost to Akwa United, in Uyo. The former champions Akwa United defeated Plateau United 2-1 at the Godswill Akpabio Stadium on Saturday.

Meanwhile, governor Wike in his congratulating message he posted on social media said, “I wish to express my heartfelt appreciation to the coaching staff and particularly the capable players of Rivers United for the valuable effort you made to emerge the winner of the 2021/2022 NPFL.

“The Government and good people of Rivers State are very proud of your exploits following your dogged performance and resilience displayed throughout the 2021/2022 season.

“It is worthy to note that over the years, Rivers United has brought so much joy and happiness to football fans and supporters all over the country.

“This victory, no doubt, marks a major milestone in Rivers State’s football history,” he said.